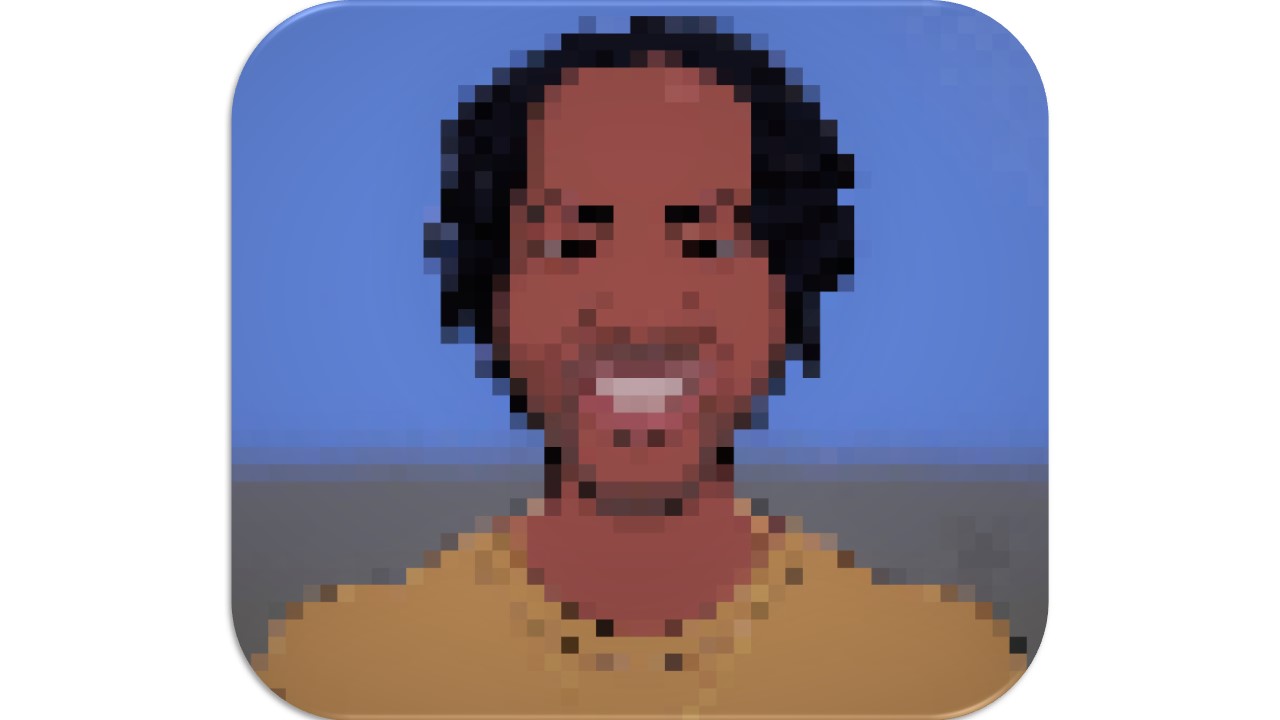 My expertise is in the area of social virtual reality (VR) aka the metaverse and interactivity in 3D social spaces, and my dissertation topic focuses on creating socially equitable spaces in social VR for younger users (children/teens).

Recent work towards my dissertation here:

Stay Connected in An Immersive World: Why Teenagers Engage in Social Virtual Reality

Social virtual reality (VR) has emerged as a popular online space for teenagers to interact and socialize. It attracts teens due to the broad range of immersive activities and social engagement opportunities, along with diverse users in terms of age and interest. Yet, little is known about teenagers’ experiences and understandings of this emerging online social space, especially regarding what aspects may attract or dissuade them to social VR. To explore this question, we conducted in-depth interviews with 20 teenagers (e.g., ages 13-18) and reported findings regarding what attracted them to engage in social VR and challenges with social VR that may dissuade them from using it. Our findings contribute to the growing body of scholarship on teenagers’ experiences in emerging, novel online social spaces and highlight potential design implications for creating safer and more fulfilling social VR experiences for teenagers.

The boom of commercial social virtual reality (VR) platforms in recent years has signaled the growth and wide-spread adoption of consumer VR. Social VR platforms draw aspects from traditional 2Dvirtual worlds where users engage in various immersive experiences, interactive activities, and choices in avatar-based representation. However, social VR also demonstrates specific nuances that extend traditional 2D virtual worlds and other online social spaces, such as full/partial body tracked avatars, experiencing mundane everyday activities in a new way (e.g., sleeping), and an immersive means to explore new and complex identities. The growing popularity has signaled interest and investment from top technology companies who each have their own social VR platforms. Thus far, social VR has become an emerging research space, mainly focusing on design strategies, communication and interaction modalities, nuanced activities, self-presentation, harassment, privacy, and self-disclosure. These recent works suggest that many questions still remain in social VR scholarship regarding how to ethically conduct research on these sites and which research areas require additional attention. Therefore, in this paper, we provide an overview of modern Social VR, critically review current scholarship in the area, raise ethical considerations for conducting research on these sites, and highlight unexplored areas.

Anonymity vs Familiarity: Self-Disclosure and Privacy in Social Virtual Reality

Understanding how and why users reveal information about their self in online social spaces and what they perceive as privacy on-line is a central research agenda in HCI. Drawing on 30 in-depth interviews, in this paper we focus on what type of information users disclose, to whom they reveal information, and concerns they had regarding self-disclosure in social Virtual Reality (VR) -where multiple users can interact with one another through VR head-mounted displays in 3D virtual spaces. Our findings show that overall, users felt comfortable to disclose their emotions, personal experience, and personal information in social VR. However, they also acknowledged that disclosing personal information in social VR was an inevitable trade-off: giving up bio-metric information in order to better use the system. We contribute to existing literature on self-disclosure and privacy online by focusing on social VR as an emerging novel online social space. We also explicate implications for designing future social VR applications

Body, Avatar, and Me: The Presentation and Perception ofSelf in Social Virtual Reality

Self-presentation in online digital social spaces has been a long standing research interest in HCI and CSCW. As online social spaces evolve towards more embodied digital representations, it is important to understand how users construct and experience their self and interact with others' self in new and more complicated ways, as it may introduce new opportunities and unseen social consequences. Using findings of an interview study (N=30), in this paper we report an in-depth empirical investigation of the presentation and perception of self in Social Virtual Reality (VR) - 3D virtual spaces where multiple users can interact with one another through VR head-mounted displays and full-body tracked avatars. This study contributes to the growing body of CSCW literature on social VR by offering empirical evidence of how social VR platforms afford new phenomena and approaches of experiencing and practicing novel identity practices in online social interactions. We also expand the existing research agenda in CSCW on the increasing complexity of people’s self-presentation in emerging novel sociotechnical systems.

A Virtual Space for All: Exploring Children’s Experience in Social Virtual Reality

Social virtual reality (VR) is increasingly becoming an emerging online social ecosystem where multiple users can interact with one another through VR head-mounted displays in 3D virtual spaces. The co-existence of minors and adults in social VR presents unique challenges and opportunities regarding how these two groups interact with each other in these shared virtual social spaces, which is a timely and understudied topic in HCI and CHI PLAY. In this paper, we report our findings of a participatory observation study to explore the interaction dynamics between minors and between minors and adults in social VR. Our findings contribute to a better understanding of young people’s engagement with technology and point to future directions for designing safer and more socially satisfying social VR experiences for minors. 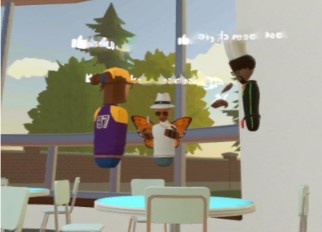 Falling Asleep Together: What Makes Activities in Social Virtual Reality Meaningful to Users

The increasingly popular social Virtual Reality (VR) is dramatically transforming how people meet, interact, and socialize online. These immersive digital spaces blend aspects of the online and offline worlds, creating new opportunities for online interactivity. Yet, questions still remain about what individuals actually do in social VR and how they envision and reflect on the design of social VR technologies. In this paper, we report our findings of an interview study (N=30) that investigated what made activities on these platforms meaningful to users as well as users’ recommendations for designing social VR to better support such activities. Our findings expand current literature on social dynamics and sociality in online digital spaces by focusing on social VR. We also inform future design directions to create more socially supportive and satisfying social VR space.

It Is Complicated: Interacting with Children in Social Virtual Reality

Social VR refers to 3D virtual spaces where multiple users can interact with one another through VR head-mounted displays. These novel digital spaces are dramatically transforming how people meet, interact, and socialize online and have attracted users of different age groups and maturity levels. This variety sometimes leads to less desirable interactions, tensions, and frustrations between different user bases (e.g., adults and children). Based on 30 interviews, we focus on how people perceive and experience interacting with young users across various social VR applications. We aim at better understanding the complex social interaction dynamics afforded by socialVR. We also discuss potential design implications toward a more child centered design for future social VR platforms.

Additional Comments: This was one of my favorite projects because this is the project where I realized the importance of studying younger users, in my opinion these users will point to the future designs.

My Body, My Avatar: How People Perceive Their Avatars in Social Virtual Reality

The perception and experience of avatars has been critical to understand the social dynamics in virtual environments, online gaming, and collaborative systems. How would emerging sociotechnical systems further complicate the role of avatars in our online social lives? In this paper we focus on how people perceive and understand their avatars in social virtual reality (VR) - 3D virtual spaces where multiple users can interact with one another through VR head-mounted displays (HMDs). Based on 30 interviews, we identified three key themes emerging in people’s perceptions and experiences of their avatars across various social VR applications. Our study contributes to further improving social VR technologies and better understanding emerging social interaction dynamics and consequences within social VR.
‍
Freeman, G., Zamanifard, S., Maloney, D., & Adkins, A. (2020, April). My Body, My Avatar: How People Perceive Their Avatars in Social Virtual Reality. In Extended Abstracts of the 2020 CHI Conference on Human Factors in Computing Systems Extended Abstracts (pp. 1-8). [paper]

The first half of my PhD I focused on implicit racial bias and the effects it can have on embodied virtual avatars. 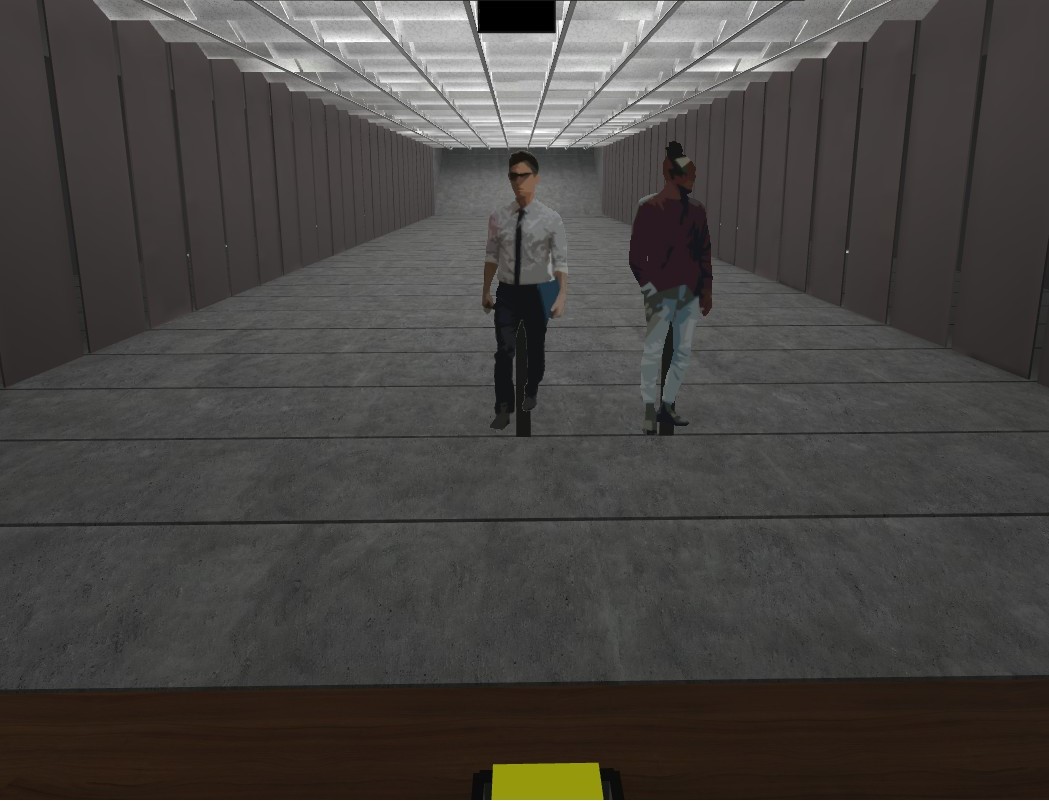 The summer of 2016, I had the wonderful opportunity to learn from Dr. Greg Welch at University Central Florida in the Synthetic Reality Lab. What we aimed to do was to increase social presence in augmented reality through plausible interactions. Working with one of the graduate students at the time Kangsoo Kim, we build a simulation in Unity using the Microsoft Hololens to create a virtual human interaction. The rendering was beautiful in the Hololens even though the field of view was limited and we used the Unity Hololens development kit. Proud to say our work was published in ICAT-EGVE 2016 and CASA 2017.

‍
In augmented reality, people can feel the illusion of virtual humans (VHs) integrated into a real (physical) space. However, affordances of the real world and virtual contents might conflict, for example, when the VHs and real objects “collide” by occupying the same space. This implausible conflict can cause a break in presence in real–virtual human interactions. In this paper, we address an effort to avoid this conflict by maintaining the VH’s spatial and behavioral coherence with respect to the physical objects or events (e.g., natural occlusions and appropriate help-requesting behaviors to avoid implausible physical–virtual collisions). We present a human subject experiment examining the effects of the physical–virtual coherence on human perceptions, such as social/copresence and behaviors with the VH. The basic ideas, experimental design, and result supporting the benefit of the VH’s spatial and behavioral coherence are presented and discussed of virtual humans(VH) enlisting help from real humans(RH). The experiment used augmented reality(AR) to display a VH who was in a wheelchair. VH would ask a real human to move a physical chair out of the way.
‍
Kim, K., Maloney, D., Bruder, G., Bailenson, J. N., & Welch, G. F. (2017). The effects of virtual human's spatial and behavioral coherence with physical objects on social presence in AR. Computer Animation and Virtual Worlds, 28(3-4), e1771. [paper] 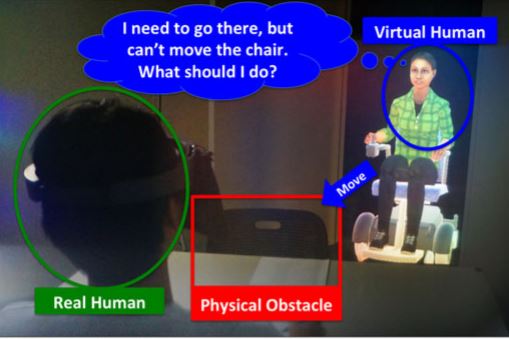 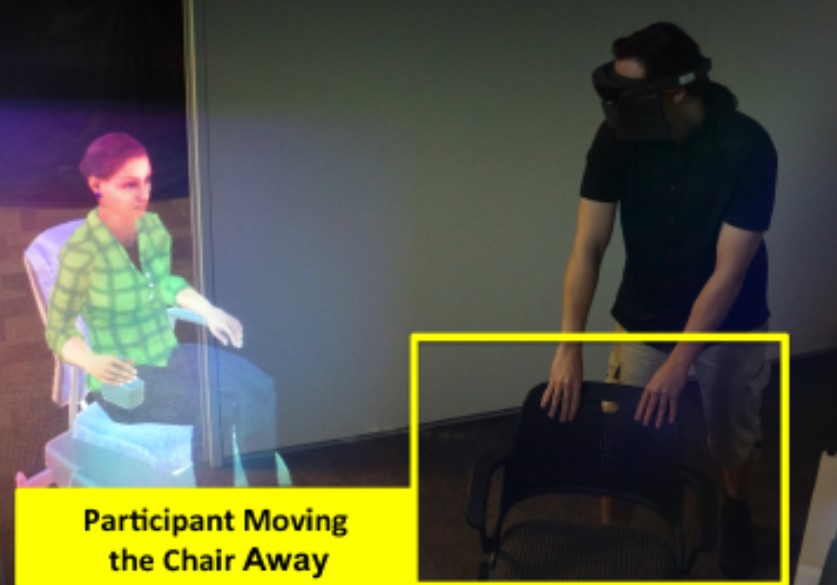 The summer of 2015, I had the pleasure being mentored by Dr. Bobby Bodenheimer at Vanderbilt University in the Learning in Virtual Environments lab. My task was to create a real world simulation of vection (the illusion of movement). I built the simulation using sketchup, vizard, and Unity. Proud to say our work was published in IEEE VR 2016. Images of the simulation can be found below.

‍
Vection is the illusion of self-motion, usually induced by a visual stimulus. It is important in virtual reality because inducing it in motion simulations can lead to improved experiences. We examine linear and circular vection in commodity level head-mounted displays. We compare the experience of circular vection induced through a real-world stimulus, an optokinetic drum, with that experienced through a virtual stimulus. With virtual stimuli, we also compare circular vection with linear horizontal and linear vertical vection. Finally, we examine circular and linear vection in more naturalistic virtual environments. Linear vection was induced more rapidly than any other type, but circular vection occurs more rapidly with a real-world stimulus than a virtual one. Our results have practical application and can inform virtual reality design that uses head-mounted display technology and wishes to establish vection. Circular vection can be induced easily and rapidly through visual mechanisms. We have an optokinetic drum that is capable of inducing compelling circular vection that works in almost all people we have tested in it. The goal of this project is thus twofold: (1) to see how well and how reliably vection can be induced in virtual reality with commodity-level HMDs as compared to real-world stimuli, and (2) to see if compelling vection could be comparably induced when the stimuli are complex naturalistic scenes, not abstract optic flow patterns.

I am passionate about working on projects encompassing social good